A Zoomdown with Frost Prioleau, CEO of Simpli.fi, on the future of CTV and the fate of the IDFA 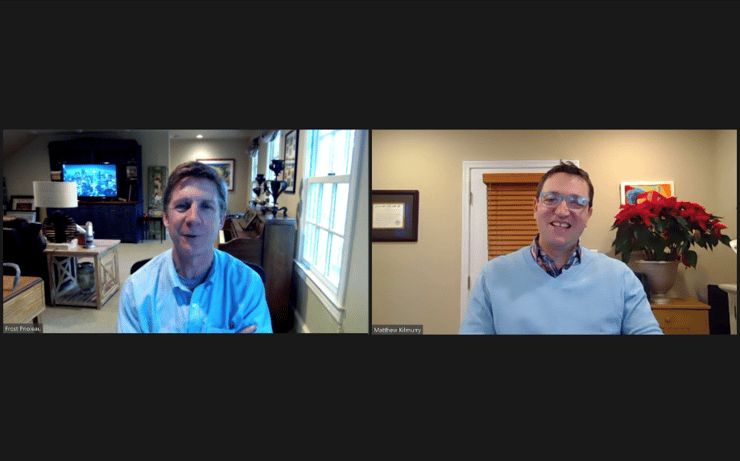 In 2020, sit-downs aren’t possible, but Zoomdowns are more accessible than ever! I had the opportunity to speak with Frost Prioleau, CEO of Simpli.fi, about a range of topics, many of them personal. Frost is very approachable, and we spent the first half talking about family and the messy nature of virtual learning for students.

We eventually moved on to one of the hottest topics for 2021: OTT/CTV (Over the Top/Connected TV). OTT/CTV advertising was one of the biggest areas of growth among Simpli.fi advertisers in 2020. Frost and team have dedicated a lot of internal resources to this including addressable geofencing and their new unified identity graph.

According to Frost, all this is now possible.

So, we put it to the test and ran some campaigns of our own. The first was a CTV campaign based on website remarketing. We set up a campaign to show commercials to website visitors of ApartmentGeofencing.com, and soon after, I received a text from a service provider who saw our commercial a day after browsing our website. How cool is that!

We also ran a test for an apartment client of ours. We targeted their main competitors with geofencing and served 15 and 30-second video commercials to the current residents (whose lease may be coming up!).

Here are the results:

In short, gone are the days of having to do big media buys to be on TV. Now you can spend a few hundred dollars and show commercials in a hyper-targeted way and track both offline (walk-ins) and online (website leads) conversions.

One of the other things we discussed is the fate of the IDFA, or mobile device ID, that we use in geofencing for targeting and conversion tracking. Apple, and to some extent, Google, are making changes in the coming year.

Below is a more in-depth POV from Simpli.fi, but one of the main things Frost said, that I agree with, is that the upcoming changes will force publishers to give users reasons to enable location tracking. Right now, some apps track location but don’t provide users any benefit from that. While it makes sense for news, weather, and sports to track location, many lifestyle and game apps don’t personalize their content based on location.

Frost said that even if, in a worst-case scenario, the volume of location data reduces significantly, there are always ways to extrapolate results based on sample size, much like Nielsen and political polls do (with much less data than we have). And there are other identifiers beyond IDFA.

I don’t think we’ll need to rely on sample data though. There is too much advertising money on the line for publishers not to take advantage of providing reasons for users to enable location.

Here’s some additional info on the topic:

The most sweeping change coming out of the WWDC was the inclusion of a pop-up setting that will require apps to prompt users to opt-in for third-party tracking of their device ID (IDFA). This IDFA functionality has previously been a part of iOS but only at the OS level with limited user control. This change will push the settings down to app-level opt-in permission.

When you download iOS 14, your IDFA will by default be set to “00000000-0000-0000-0000-000000000000”. It will remain this way until your app updates to be compliant with the new iOS 14 settings. This usually happens automatically when operating systems are released. Once the updated app downloads, users will receive a pop up asking if they elect to opt-in for third-party tracking. Only after accepting this will the IDFA be available to the app, and thus be available to be sent in the bid requests from the app.

With this update to iOS, Apple has changed course and is keeping the IDFA. This is the primary identifier for many companies in the industry, but it is not the only identifier that Apple or iOS apps use.

The second change coming out of the WWDC from the iOS 14 update is allowing users to share “approximated” location data. If a user sets location accuracy to be “approximated,” it means that their location will not be precise, but instead, apps will receive a 10 square mile “general area” where you are located.

Although this approximated data will be a change in terms of the precision of lat/long information that we receive, this change does not seem to be as large of a change as was experienced with iOS13. Users will by default continue sending Precise Location information. As of now in the early iOS SDK Beta, users would need to intentionally go in and turn on the approximation setting.

At this point, many applications will still require Precise Location for functionality such as driving directions and others that could not operate without precise location data.